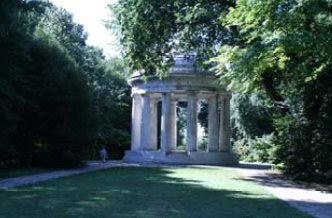 When I lived in DC, my favorite monument to visit on the Mall wasn't the Lincoln Memorial, even though it is steeped in visual history. I stood where King stood and looked out, wondering what he was thinking and feeling, but that isn't my most memorable time on the Mall. The Washington Monument provides a stunning view of the entire city, but it hardly qualifies.

Just north of Independence Ave, in a small grove of trees, with a beautiful walkway leading to it, is a small Greek-revival, columned building, the District's Memorial to those who served in World War I. Not a national monument at all, out of the way, shaded, forgotten as those events of nearly a century ago have been forgotten in the rush of later horrors. It was a great place to go and sit with a book. Quite a few Saturday afternoons were spent in the quiet shade of that building.

Now, it seems, the memorial is finally getting a facelift. That's a good thing. Like the war whose dead it memorializes, the building deserves more attention than it has received. Like the war itself, we need, as the centennial of its beginning approaches, to remember it, to remind ourselves that the 20th century began with horrors unimaginable up to that time; overshadowed by the ability of humans to be even more vicious than we had previously realized, we have forgotten how shattering that event was to European civilization and sensibilities. We need to refurbish the building and refurbish our understanding of the beginning of the end of an idea of Europe, an idea that, while full of horror and evil, also strove to be better than it was. That it ended up being far more horrible than it could have conceived is, perhaps, a testimony to the inherent limits and inconsistencies in that idea. That doesn't render those ideas any less noble.

Next time you visit the nation's capital, take a walk down Independence Ave, SW, and you will see it, but you have to look closely. No matter the season, the tree-lined walk is a great photo. Go, and sit, and relax, and remember.
Posted by Geoffrey Kruse-Safford at 8:35 AM

In honor of our Nobel Laureate President, here's John Lennon cutting through the chatter.

Posted by Geoffrey Kruse-Safford at 8:23 AM

It seems that there are liberals out there who aren't quite sure what to make of Barack Obama's Nobel laureate status. Apparently, in the word of Matt Yglesias, being given the Prize at this point is "dubious".

Dubious or not, the Prize is awarded for specific efforts - after all, Henry Kissinger has one, too, and he is for all intents and purposes, a war criminal. That doesn't make the prize itself illegitimate. I see no reason in the world why the political dimension - a nod of approval from a certain section of the international community toward the United States and its President - shouldn't be considered an issue of merit and worth.

I should add that Yglesias is also right in that the right-wing howls over the Nobel Committee's decision make supporting the whole thing that much easier.
Posted by Geoffrey Kruse-Safford at 2:44 PM

It Couldn't Have Happened To A Nicer Guy (UPDATE)

The Norwegians have style.

He and Teddy Roosevelt share the honor of being the only sitting US Presidents to win the Peace Prize.

Of course, we should brace ourselves for the howls from the right, but for this moment - right now - I am proud to be an American.

UPDATE: I stand corrected. Woodrow Wilson won for his efforts at the Paris Peace Conference at the end of WWI, and the creation of the League of Nations.
Posted by Geoffrey Kruse-Safford at 7:17 AM

Today is Matthew Shepard Day. Or, at least, it should be.

Eleven years ago, 21-year-old Matthew Shepard was beaten and left to die on the side of the road outside Laramie, WY for the crime of being himself. One of the persons convicted in this horrible murder shows no remorse, and even says that Shepard "needed killing."

It is long past time for a hate-crimes bill to be passed, to draw a line in the legal sand that insists that we, as a society, will not allow those who violently attack others because they are alive and different from others.

Let us not allow Matthew do have died in vain. Let us remember him, the horrible way he died, and insist, "Never again."
Posted by Geoffrey Kruse-Safford at 5:06 PM

Marty Peretz Is So Stupid

What I suspect is that the president is probably a clinical narcissist. This is not necessarily a bad condition if one maintains for oneself what the psychiatrists call an "optimal margin of illusion," that is, the margin of hope that allows you to work. But what if his narcissism blinds him to the issues and problems in the world and the inveterate foes of the nation that are not susceptible to his charms?

Since I'm in the midst of reading Lasch on the issue of narcissism, it is quite frustrating to read this kind of crap. He has no idea what he is talking about here; it's like someone once mentioned the word to him, and he thought, "I should use that!"

George Will, who is even stupider than Marty, has latched on to this notion with all the gusto of a high school sophomore in the literal sense of being a "wise fool".

It's bad enough they are criticizing the President for something that never happened. What's worse, they are doing so in a way that makes the angels cry because it is so dumb.
Posted by Geoffrey Kruse-Safford at 3:50 PM

In conservative fantasy-land, not only is the United States crumbling around us, the cold, dead hand of the state ready to force us all to sing songs to the greatness of Barack Obama while it laughs at health insurance company workers forced to look for work elsewhere; the rest of the world thinks we are a joke, ready to fold up under the pressure because we have a defeatist President who cares little for the use of force in the world, cowed by the tinnest of tin-pot dictators. For example:

We Americans, and the world, are truly watching a return to the planet of the apes (chaos and destruction), but as bleak as this reality is, we are still the architects of our future and with that there is hope, and the possibility of redemption.(emphasis added)

In this weird place where we all live and work and breathe, however, things aren't quite so bleak as bad early-70's dystopian movies:

The United States is the most admired country globally thanks largely to the star power of President Barack Obama and his administration, according to a new poll.

Reality is so stupid.
Posted by Geoffrey Kruse-Safford at 2:17 PM

Without a doubt, the best thing I clicked on all day was my very first read, which led me to Conservapedia's Conservative Bible Project. Sadly, No! has a nice rundown of their "rules", but the best - a kind of summary of stupid - comes before this particular bit of fun.

Large reductions in this error can be attained simply by retranslating the KJV into modern English.

First of all, there is an updated Authorized Version, the New King James Version.

Second, to do what Conservadepia is saying - "translating" the Authorized Version in to contemporary idiom - isn't translation, it's a paraphrase. Translation comes when one takes the original manuscripts in Hebrew and Greek and wrestles them in to a form that is readable for contemporary English speakers. There are several paraphrases based on the Authorized Version out there, most notably the Living Bible (which has some serious flaws).

Third, I do so love the fact that these "Biblical scholars" have decided, based on no evidence whatsoever, that the story of the woman caught in adultery, is a redacted addition. Apparently the early church was overrun by liberals who thought that forgiving some slut caught in the act was better than stoning her to death.

I can't wait to read this piece of trash. And they say we liberals don't respect the Bible.
Posted by Geoffrey Kruse-Safford at 2:17 PM

Music For Your Monday

I haven't featured Tom Waits in, like, forever. He is, beyond a doubt, my favorite songwriter, arranger, and singer - and, yes, I said singer. His voice isn't bad, it's just harsh, deliberately created (according to an interview I heard with Terry Gross on NPR) because, as a child, Waits grew up listening to people like Sinatra and Dean Martin. As a boy, he tried to imitate them (adding in the scratchy sounds of some 78s and the general noise from LPs) and it made his voice rough. Of course, smoking a pack or two of unfiltered cigarettes a day also can do things to the vocal chords.

Even more than Dylan, Waits is the singer-songwriter for me. While Bob Dylan does have a sense of humor, the near-deification that has created BOB DYLAN has forced so much of his natural humor and sense of self-deprecation under the protective shell of his natural shyness. To be honest, I don't blame the guy. Waits, on the other hand, continues to do what he has always done - write songs about hobos, drunks, paranoids, and occasionally hopeful songs for children and the children in all of us - and pays very little attention to a press corps that, not understanding him or his music, ignores him. His fans love him and his songs. Sometimes it sounds like someone is banging on an old cast-iron heating register to keep the beat. The guitars, and banjos, and pianos all sound like they are just about to slip out of tune. It's wonderful stuff, and while I know he takes some getting used to, once you have fallen under his spell, it's impossible to deny his brilliance and sheer musical genius.

Posted by Geoffrey Kruse-Safford at 1:48 PM

I was going to write about Steven Hayward's Outlook piece yesterday, but to be perfectly honest, it's crap. The pieces from "conservative intellectuals" he offers up are crap. His juxtaposition of intellectual conservatism and "populism" is crap. His history and grasp of how shallow most conservative "ideas" are betrays his own adherence to them. His refusal to understand the utter failure of conservative governance under eight years of George W. Bush shatter any "integrity" he may have.

Read it to laugh at how stupid it is. Just don't believe there is anything substantive to it. Beyond spanking radio talk show hosts, and wearing on his sleeve the typical conservative desire to have daddy - whether in the form of William F. Buckley or Ronald Reagan - come and make everything better, the piece is so bad it fits in perfectly with the continued downward slurge (in Winston Churchill's apt phrase) of The Washington Post.
Posted by Geoffrey Kruse-Safford at 1:37 PM