This week has been hard.  Listening to the racist celebration of the not guilty verdict in the George Zimmerman trial - and the on-going trashing of the memory of a dead 17-year-old whose sole crime was walking home through a neighborhood one person didn't believe he had a right to - it's been a strain not to scream.

To top it off, the other day I saw this:


An openly gay New Mexico high school student who spoke out against bullying died Tuesday after his family removed him from life support following a suicide attempt over the weekend.

Carlos Vigil, 17, posted a suicide note online on Saturday where he described being the target of bullying, and wrote, “The kids in school are right, I am a loser, a freak and a fag and in no way is that acceptable for people to deal with.”


I’m sorry to those who I offended over the years. I’m blind to see that I, as a human being, suck. I’m an individual who is doing an injustice to the world and it’s time for me to leave. Pleas e don’t ever feel sorry for me, or cry – because I had an opportunity at life and that opportunity is over. I’m sorry that I wasn’t able to love someone or have someone love me. I guess it’s best though, because now I leave no pain onto anyone. The kids in school are right, I am a loser, a freak, and a fag and in no way is that acceptable for people to deal with. I’m sorry for not being a person that would make someone proud.

The first time I read this story, I couldn't read the note through.  It broke my heart.

Then I became angry.  Just like the blind hatred of young black men that lets self-avowed Christians celebrate the death of one at the hands of a remorseless vigilante, the visceral hatred of sexual minorities led one young man to apologize to the world for offending it just by being alive.

This cannot go on.  It has to stop.  Those who talk about gays and lesbians as if they are some kind of deviants - you are the reason Carlos and people like him die, whether by their own hands or at the hands of others.  Those who insist that people who are attracted to others are some kind of danger to the rest of us - you are the reason young men and women like Carlos turn to drugs and violence and self-mutilation and finally tell the world they're sorry they were ever alive and kill themselves.

To anyone who thinks that this is about mental illness - it is.  That mental illness is called bigotry, the inability to see human beings who are different than oneself or one's self-identified group as bearers of worth and dignity.  Just as the Zimmerman verdict has overturned a rock letting us see and hear the racist bugs crawling through the mud of American life*, let us honor Carlos Vigil by calling out all those who hate.  Let us not let them blame another dead kid for his own death.  Let us remember Carlos the best way we can - by showing the world he was not a freak and he had nothing to apologize to anyone for.  It is we who did not do enough or say enough in defense of Carlos and others like him who owe the apology.

We owe them more.  We owe them a world where the thoughts and words and deeds of Carlos Vigil are no longer possible.

UPDATE: And the world turns and more decent pretenses drop to the floor as naked racism appears at National Review, a publication with a history of it, going back to Bill Buckley's attacks on MLK and the Civil Rights Act. 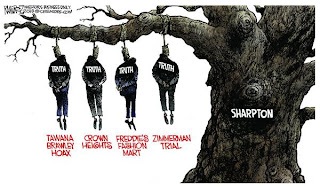 Quite apart from its incongruity - why is Sharpton the tree in this picture? - and using lynching as a device for political commentary, I just wonder why Al Sharpton makes so many on the right incoherent in their rage.

UPDATE II: When I say that the right-wing bigots aren't bothering to hide, all anyone need do is read Roy Edroso's Village Voice column.  Be warned, though.  It's biased the same way Media Matters is biased.  Roy uses actual quotes from right-wing bloggers which is obviously proof of bias and lies.

*I should note that I am not suggesting there were no expressions of racism before the verdict.  The coded messages of racist rhetoric were always clear enough.  That facade, never very sturdy, has collapsed under the weight of  celebration for the killer George Zimmerman.  Shorter point: These folks aren't bothering to hide behind code anymore.  They are waving their racist flags high.
Posted by Geoffrey Kruse-Safford at 7:27 AM

I sit on a man’s back, choking him and making him carry me, and yet assure myself and others that I am sorry for him and wish to lighten his load by all means possible … except by getting off his back. - Leo Tolstoy

Following the right-wing celebrations at George Zimmerman's not guilty verdict has been an exercise is trying to find room for compassion for people who hate and fear so much they can shrug off the taking of the life of an innocent 17 year old kid.

The linked post at Patheos led to this post.  While the context is anti-gay bigotry, it fits in well with any form of hatred:


So, in the interest of public service, I have decided to help my fellow Christians out a bit — and offer some loving advice on how to not be viewed as a bigot. After all, that is obviously the greatest fear out there in Evangelical land (second only to the unspoken fear that we gays will destroy the fabric of society and make straight marriages illegal. Or something). Poor Ralph Reed. He really, really, didn’t like the idea of being a bigot. So let’s help him out, shall we?

10) Understand that we’re not you.

What does this mean? Simple. We are not interested in squelching your rights like you have done to us for decades. We’re not interested in preventing you from getting married. We’re not going to pass a law that makes it legal for someone to fire you because you’re Christian. We’re certainly not going to make Christianity illegal. Our agenda is, and always has been for you to STOP doing this things to us.
Frankly, you’ve been punching us on the face for years. It’s not an infringement on your rights to say “stop punching them in the face.” Never has been, never will be.

The thought that real justice might yet prevail in the land leads to fear that the tables might well turn.  Thus the claims that Christianity will be outlawed and/or Christian persecuted.  Thus the constant barrage of claims that those seeking justice for Trayon Martin are "race-baiters" and "the real racists".  Thus the lack of remorse on Zimmerman's part when he told Sean Hannity he would do the same things in the same way even knowing what he knows now.  Thus Dan Riehl's claim that Trayon Martin got what he deserved, even wanted.

Such fear is hard to excise.  Yet we must.  For all our sakes.  Most of all, for the memory of a young man who only wanted to get back to his father's house and had his life ended because someone in the neighborhood through which he walked was terrified of his mere presence.
Posted by Geoffrey Kruse-Safford at 10:50 AM

I was waiting to gather my older daughter and a friend from a One Direction concert last night, idly flipping through Facebook on my phone when I saw the news: George Zimmerman was found not guilty. I happened to be standing next to an African-American man at the time. I must have said something because he looked over at me and asked me what was wrong (he and I had chatted briefly about kids these days and how happy we were our children had the chance to go to a show like this). I hesitated for a moment, then told him. At that moment I wanted to be anywhere else, be anyone else. Emotions passed over his face so quickly it was impossible to say what they were, or even if they were. Then he sighed, shook his head, and said, "It's OK."

I didn't ask and there was an uncomfortable silence for a couple minutes afterward, but his statement had to be directed to me. The fact is, it is not OK. It will not be OK. Charlie Pierce, as usual, is most eloquent on how and why it is not now and will not be OK. 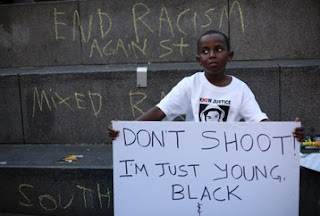 We should be able to do better than this. But we can't. Some people, some lives, just aren't as valuable. At a time when crime has become far less common than a decade ago, and rare compared to a quarter-century ago, there is still this lingering fear that none of that is true. We still live in fear of the All-American Bogeyman - the young black man.  Where he is, how he's dressed, these are always changing because at the end of the day it comes down to the same monster stalking our national dreams.  Perhaps it was to much to ask of those six women on the jury, to let George Zimmerman and America know there are no such things as monsters.  Perhaps it was asking too much of these six women not to hear "black youth" and "hoodie" and "crime wave" and not see in George Zimmerman someone who acted as any of them would, as any of us would.

We are a nation that lives in fear of monsters.  Even as the reasons for that fear shrink with each passing day and year, we seem to want monsters to be out there to justify the fear we continue to feel.  To some of us, at least, George Zimmerman demonstrated a recklessness that should have led to his conviction.  To the six people on that jury, the only ones whose opinion mattered, it was far better that George Zimmerman be told he committed no crime.  Exorcising monsters, after all, is an honored profession.
Posted by Geoffrey Kruse-Safford at 9:16 AM