On The Eve Of Holy Week

Making disciples of Jesus Christ for the transformation of the world. - Mission Statement of the United Methodist Church, adopted 2008

With Holy Week about to begin, as we move from the triumphal entry to Jerusalem on Palm Sunday through the betrayal on Maundy Thursday, the crucifixion on Good Friday, the silence of the tomb on Holy Saturday, and the first declaration of the Good News on Easter morning, I think it is important to be in prayer and contemplation for what these events mean for us.

Not in terms of our salvation.  The overarching reality of the passion narrative is that this is God's work for us, full and sufficient for the purpose for which it was divinely ordained and intended: the reconciliation of fallen creation with God.

Getting stuck on that, as far too many Christians tend to be, makes the entire enterprise small.  It also makes God small, powerless in the face of human freedom and the snares of the Devil.  For far too many, however, it is preferable to consider themselves on the inside while the rest of creation slides irrevocably to perdition.

What, then, is this reconciliation for?

We exist, we have been created, we have been saved, in order to declare to the world the simple reality revealed in Jesus of Nazareth: That God is love, and wants us to acknowledge that love in all we say and do.

This simple reality, this kernel within the husk of dogma and two thousand years of excess verbiage, is the most revolutionary force ever.  We need no longer fear our separation from the God who creates and sustains us; God has offered the Divine Life  in order that we may yet live and love in the never-ending presence of Love Incarnate.  Our job - and we do have one - is to get the word out to the rest of the world that there is nothing to fear any longer.  There is nothing in others to fear and hate.  There is nothing even in death, that last enemy whose time has come even if it isn't aware of it, that can separate us from the love we have from the Father in the Son through the Spirit.

As we move through the days and events of the coming week, even as we hear the call to remember the death of Jesus Christ on the cross, we are to give praise and thanksgiving to God.  We are to get the word out about this love.  Doing that might just change everything.
Posted by Geoffrey Kruse-Safford at 10:16 AM Links to this post

Wherefore, the man who lives in love reaps life from God, and while yet in this world, he even now breathes the air of the resurrection; in this air the righteous will delight in the resurrection. Love is the Kingdom, whereof the Lord mystically promised His disciples to eat in His Kingdom. For when we hear Him say, “Ye shall eat and drink at the table of my Kingdom,” what do we suppose we shall eat, if not love? Love is sufficient to nourish a man instead of food and drink.  - St. Isaac of Nineveh, Homilies I, No. 46, pp. 357-358

Quite by happy accident, I stumbled across a series of posts at Eclectic Theology that features the work of 7th century mystic,ascetic, and preacher St.Isaac the Syrian.

I suppose all those folks who have been heaping scorn on Rob Bell for suggesting God's Love is more powerful than our sin (something you'd think these folks would remember from, I don't know, Easter) are quite ready to toss blessed St. Isaac on the same dung heap.

The series is excellent, and the long quotations from St. Isaac's sermons, while sometimes odd to contemporary ears for their occasional neo-Platonism, nevertheless circle back around, again and again, to the heart of the Scriptural testimony: that God's love, incarnate in Jesus of Nazareth, is fully revealed in the death and resurrection; from that flows the Spirit of this same love that fills all creation, renewing us so that we might yet be what God created all to be - all creation living to love and give praise and thanksgiving to God for our existence.

While I'm sure some folks won't like what St. Isaac wrote concerning hell and punishment, it is rooted in the heart of the Scriptures, the Gospel of Divine mercy and love revealed in Jesus of Nazareth.  This is why I think the one area where Isaac kind of misses the boat is his argument that mercy, rather than justice, describes God's dealings with creation.  It might be better, as Karl Barth (and those following him) said, that love and mercy define the quality of God's justice.  Revealed in the passion, God's justice is a justice that forgives, an anger that is satisfied with mercy, and a double election that swallows up the contradictions in the cross and empty tomb.  In that sense, I think, while it is all well and good to speak of the prodigality and scandal of Divine Mercy, it should always be done as a description of the revealed quality of Divine justice.

That, however, is a relatively small nit to pick.  There is beauty in these sermons.  There is, above all, a vision of Divine Love and Grace, the very heart of the Gospel as revealed in Jesus crucified and raised, that is refreshing as it is, more than likely, scandalous to far too many wedded to a vision of themselves as winners of the Great Cosmic Lotto.

I recommend these posts, in particular as we move in and through Holy Week.
Posted by Geoffrey Kruse-Safford at 5:08 PM Links to this post 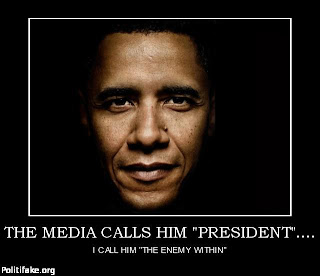 A friend of mine on Facebook posted this photograph. It, along with some of the comments on the original from a page titled "Prepare to Take Back America", sums up everything that's wrong with our politics.

As for the whole "Enemy Within" . . . Really?  What, precisely, has he done that qualifies for a description as "the enemy"?  Has he attacked our institutions?  Has he allowed foreign nationals to attack Americans and American interests with impunity?  Has he surrendered our sovereignty in any meaningful way?

Of course he hasn't.

Thankfully, the number of Americans who really think this way is relatively small.  Yet, they have powerful allies.  That's why Congress does nothing.  Opponents of the President refuse to do anything to advance his agenda.  Not because they "disagree" with it in some polite fashion.

Because their constituency calls him "the enemy within".

Everything that is wrong with the United States right now comes down to this.  Our inability even to grasp the simple proposition that our problems, as big as they are, are manageable as long as we are willing to work together, is unintelligible because there are those who refuse, "on principle", to work with the President.

What, exactly, are either the President or Democrats in Congress doing that enrages them?  Is your pet issue gay marriage?  A majority of Americans support its legalization.  Ten states recognize it, with more on the way.  Is it guns?  The harshest thing anyone in a position of authority has offered is removing the so-called gun show loophole, something a vast majority of Americans support.  The assault weapons ban was killed by Senate Majority Leader Harry Reid who is (you knew this was coming) a Democrat.  So this fantasy of gun-grabbing, goose-stepping liberals is thwarted by . . . a Democrat.

If you are really worried about spending, consider how much the President has cut spending in his first four years; that federal spending, as a percentage of GDP is at its lowest in decades; with the sequestration in place, meat as well as fat is being tossed in the garbage disposal.  You'll excuse me if screeching about spending makes me turn away.

Taxes?  Seriously?  Americans are the least taxed industrialized people on the planet.  Our wealthy, for all intents and purposes, are not taxed at all.  Neither are our largest corporations, at least those who haven't scuppered to the Cayman Islands (without incurring any penalties or fees for emigrating to avoid what little tax liability they do face).

All in all, the reality in America should encourage us to work together.  Except, alas, for the person "the media" calls President.  I wonder what's so different about him that has some people all up in arms?  I can't put my finger on it.

Help me out here.
Posted by Geoffrey Kruse-Safford at 7:29 AM Links to this post

These and other bits of CPAC ridiculousness - like the gay press trolling Craiglist ads to catch some major-league hypocrisy - kept much of the left-wing giggling behind its collective hand.  All the while two pieces of news, each horrible in its own way, emerged with only scant attention paid.  First, there was the revelation Friday not only that Richard Nixon actively worked to sabotage the Paris Peace Talks while he was only a candidate for the Presidency.  It turns out Lyndon Johnson knew about it because Hoover's boys had the transcripts thanks to a bug on the phone of the South Vietnamese ambassador.  Johnson was tempted to go public, but decided he didn't want the extent of FBI wiretapping on the diplomatic corps revealed.  Even though both Johnson and his Secretary of Defense, Clark Clifford, called what Nixon was doing "treason", they kept it hush-hush.  The story, as well as how it links up with later Republican international ratfuckery, can be found at Alternet, and is worth the time to read the whole thing.

The other big news item was the guilty verdict in a rape case in Steubenville, OH.  What makes this case, and the subsequent verdict, important are really two things.  First, is the intersection of good-old-boyism and the Internet, with videos of the victim and perpetrators uploaded to YouTube, videos that pretty clearly demonstrate how the poor victim was not only incapable of granting consent, but that not only the two young men on trial but others involved treated the young woman like a piece of meat.  The other is the way the trial, and the media's coverage, divided this small city of less than 20,000.  A young woman, passed out from too much alcohol, is repeatedly raped and sodomized and there is far more attention paid to and sympathy expressed for the young men convicted of these horrific acts than the young woman in question.  Excuse me while I withhold my sympathy a bit from them, and pretty much hold anyone who defended them in contempt.  Their conviction is a victory for justice in the midst of far too much ugliness.
Posted by Geoffrey Kruse-Safford at 11:07 AM Links to this post