Head, Meet Wall With My Assessment Of Obama Administration Policy As An Extra

Did I miss the tipping point, when the people who serve elective office decided that being stupid was some kind of advantage?

Several members of the Congressional Progressive Caucus have sent a letter [PDF]to the Obama administration demanding greater openness on all aspects of its counterterrorism-related targeted killing program.
The majority of the letter focuses on if and when armed drones could be used to target U.S. citizens on American soil, . . .

The question has been asked, and answered, numerous times.

Let us consult the Wayback Machine, traveling back to autumn, 2000.  That was when a United States warship, the USS Cole, refueling off the coast of Yemen and was attacked by suicide bombers in a small boat that came up alongside the cruiser.  While a US judge ruled Sudan guilty of the attack, the fact is it occurred off the coast (if you read the previous sentence) of Yemen.

Fast forward eleven months and we all remember what happened in September, 2001.  Within a couple months, our troops were on the ground in Afghanistan in force.

Fast forward a few months and, suddenly, the Bush Administration was demanding we go to war with Iraq.  For all sorts of reasons, none of which made sense, and none of which were related to reality.

Fast forward to 2008 and we had hundreds of thousands of American service personnel in combat in two countries in large numbers, and in smaller numbers elsewhere.  There was a Presidential election that year, and the guy who won promised he'd end the ground war and bring the troops home from Iraq.  True to his word, he did just that.  He also said he would "refocus" attention on Afghanistan.  True to his word, he increased American troop presence in Afghanistan by almost 100,000.  While the goals for the latter policy were always shifting, this also allowed this same guy to declare "victory" (without ever really explaining what "victory" meant) and promise to start drawing our troops out of Afghanistan.  And he's doing that, too.

What we have, in early 2013, is the collision of multiple realities.  Reality the first is the presence of groups of individuals determined enough to strike targets of opportunity in dramatic fashion, expressing their hatred for the United States, rooted loosely in really bad interpretations of Islam.  Reality the second are the many years of mismanaged war-and-occupation by a barely credible American President and Administration that left thousands of Americans dead, tens of thousands wounded, and hundreds of thousands of non-Americans, combatants and non-combatants, dead and wounded.

In the process, Pres. Obama has been trying to figure out how best to strike against forces hell-bent on attacking the United States, its interests, and its persons without going full-monty invasion.  The development and advancement of Unmanned Aerial Vehicles ("drones" in common parlance) offer one among a myriad of solutions to this problem, particularly in regions where it would be ridiculous to commit even commando units (read Pakistan, parts of the Arabian peninsula, and countries in central Africa) on short notice.  Balancing the first two realities, which kind of fed on one another, and the third reality, which created conditions for a new set of problems, leaves us with a set of policy choices that range from unrealistic to bat-shit insane to sucky but preferable to drifting along doing nothing.  Among the "unrealistic" are the folks who insist that every person accused of participating in acts of violence against the United States be treated like criminals.  Some have been, to be sure, and it seems the Obama Administration is doing a pretty good job of this, whether here at home or overseas.  Among the "bat-shit insane" folks are people write things like this.

We had a situation prior to 9/11.  The Iraq invasion and the long-term occupation  both of Iraq and Afghanistan have exacerbated that situation.  Pres. Obama can't ignore it.  He can't bring every terrorist to justice.  What he can do is create a set of possible reactions that are flexible enough to meet currently-understood contingencies.  This includes, alas, using UAVs to kill an American living overseas who was fomenting war against the United States.  Would it have been preferable to have apprehended him and brought him to trial?  Sure.  In the event, however, the President made the call to do something else.

I have no problem with questions being asked.

I do have a problem with stupid questions that have already been answered being asked over and over again.
Posted by Geoffrey Kruse-Safford at 5:14 PM

It Isn't The Mind That's Small

Zerlina Maxwell is a pretty tough cookie.  According to Josh Marshall she's a pundit, an activist, and a law student.  Add to that, she went on Hannity (of all forums) and talked about guns, rape, and even outed herself as a victim of rape.

How is she rewarded? 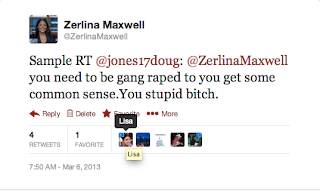 This is just a sample of the tweets she's received, the source of which is explained in this comment at LGM:


No, they’re arguing for rape as a means of punishing the black woman who had the temerity to disagree with them in public, thus joining a long chain of men throughout history who have used it as a means of colonizing and taking control of women’s bodies, especially those of women who are also ‘other.’ This is an old, very ugly story.

Isn't it odd, to say the least, that all these frothing manly-men who insist they have to have their guns to protect them from the ensuing Zombie apocalypse are so threatened by a young woman who says, "You know, you're not quite right about that."?

How sad to live a life threatened by women and minorities, seeing the change in our country and world not as something about which to wonder and in which to move, but rather something against which to struggle, even to the point of threatening a brave, soft-spoken, woman.

Also, too - for people who are commenting on various threads about this matter around the internet, if you feel it necessary to type something along the lines of, "Obviously rape is horribly wrong," and then go on to explain how Maxwell, a victim of rape, doesn't know what she's talking about, you should stop, count to ten, and then ask yourself, "Do I really want to type that comment?"  The fact of the pause answers the question before it was even asked.

More of those good people Ta-Nehisi Coates wrote about.
Posted by Geoffrey Kruse-Safford at 1:33 PM