The Soundtrack Of Your Life

Hands down, my favorite movie soundtrack is for the Guy Ritchie film Lock, Stock, and Two Smoking Barrels. The problem comes trying to pick out a song! James Brown, Junior Murvin, Robbie Williams, even an old British pop chestnut from the mid-1960's is on offer. So, let's just go with Pete Wingfield's "18 With a Bullet".

Posted by Geoffrey Kruse-Safford at 7:57 AM

So Many Songs I Wish I Had Written

There are so many songs I'd wish I'd written. Most of them should be obvious by now.

So, rather than obvious, let's go with a surprise.

When I heard the next song, in the depths of the 1980's, I thought it was really good. Each time I heard it, it got better. Even though the band's release after the LP that contained this song was even bigger, had more radio-friendly songs on it, this song stands out as something special. It's simple, got a driving beat you can either dance to or nod your head to. The lyrics are simple and direct. It's the kind of thing you can hear in a club or in an arena and, if the band is cooking and the vibe is right, should work to get people pumped up. So, without further ado . . .

Posted by Geoffrey Kruse-Safford at 7:32 AM

Dedicated II - Some People Don't Quite Get Some Songs

I always chuckle when people request Eric Clapton's chestnut, "Wonderful Tonight", at wedding receptions. I didn't need to hear an interview with him to know the song was about a guy who's so tired of his woman's nagging, her neediness, that he drinks himself to oblivion and repeats empty compliments just to shut her up. Yet, yeah - folks want to hear it, thinking it's a song about how much someone loves someone else.

"Every Breath You Take" is even worse in this regard. A song of dangerous obsession, I don't know who in my family coined the phrase (it might have been my youngest sister, the cleverest of us by far), I call it "The Stalker's Anthem". Getting requests for that song just creeps me out.

Richmond had a pretty good commercial "alternative" station back in the mid-1990's, when we first moved down there. They even, on occasion, took requests, something most commercial stations just don't do. I was shocked when a woman not only requested, but dedicated "Possession" by Sarah MacLachlan to someone. In . . . love.

The lyrics are taken from letters Ms. MacLachlan received from a "fan" against whom she took out a TRO. There isn't an ounce of love in this song. I called the station and chatted with the on-air personality (I refuse to call him a DJ because, well, he sits in front of a microphone while a tech guy presses a button on a computer to cue up songs) and we both agreed it was kind of sick. The next night he played it again, with my dedication to the people who weren't bright enough to get the song was sick. It's the one and only time, and the last time, I've had a request and dedication on commercial radio - to all the people who think, "I'll kiss you so hard/I'll take your breath away/And after I wipe away the tears/Just close your eyes, dear" is romantic, rather than a threat of physical violence.

Posted by Geoffrey Kruse-Safford at 1:20 PM

Alfred University had a great radio station once upon a time. WALF - 89.5 on your FM dial; 200 watts of stereo power that almost reached outside campus - was the kind of place people imagined college radio was, once upon a time. It had no format, allowing the DJs the opportunity to play whatever they wanted, FCC regulations permitting. Or not, on occasion.

My friend Jim had one of the most eclectic shows on their schedule. When we were juniors, someone - maybe it was him, I don't really remember - found some recordings of old radio serials, and Jim decided to play them during one show. His opening was a mash-up borrowed from, among other things, the opening of that chestnut, the TV Theme Songs LP that was such a huge hit in the mid-1980's. He could play jazz one second, something obscure by Aztec Camera (a truly underrated band) the next.

His good friend Phil had the heavy metal show. Phil found gems amidst the dreck that was heavy metal in the decade that made it popular. When we were seniors, he discovered Auburn, NY's favorite sons, Manowar. They had released an album called Fighting The World whose virtues included a direct rip-off of the cover of KISS's classic Destroyer LP. Don't believe me? 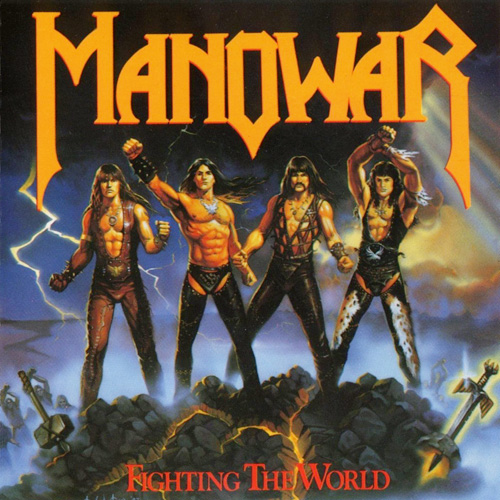 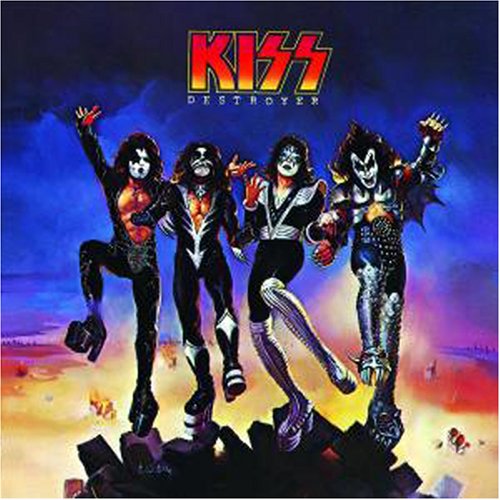 All their songs have a "sword-and-sorcery" theme, as if they hadn't quite escaped the clutches of Robert E. Howard. The cheese factor is extremely high; a bunch of kids from Auburn writing about fighting the world, sharpening their swords, killing the evil hordes is a recipe for hilarity. The opening song, "Defender", was something special. The band had finagled Orson Welles to "narrate" the opening of the song, adding a level of faux-gravitas to their over-the-top songs. This concert clip is pretty cool only because the bass player does a fantastic job on the intro, playing his eight string for all its worth.

Posted by Geoffrey Kruse-Safford at 2:58 PM

When the Rev. Mrs. and I clean the house together, we enjoy pretty much anything by Pat Metheny (except for his noise record, Zero Tolerance For Silence). Even though he's doing acoustic covers of The Association and insisting in interviews that The Carpenters are both cool and musically sophisticated, he has also produced some truly marvelous music over the decades. With long-time collaborator Lyle Mays, and in this video clip with bassist Mark Egan doing a fair-to-middlin' imitation of the late great Jaco Pastorius, Pat created a sound and style that is recognizable the moment you hear it.

You're Never Too Old To Have A Crush On Someone Famous

My favorite line from WKRP in Cincinatti has always been, "Hey Venus, let's go look at some Carly Simon album covers." See, my oldest sister had a couple old Carly Simon records, so I knew instantly what Johnny Fever was talking about. 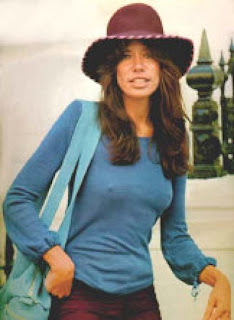 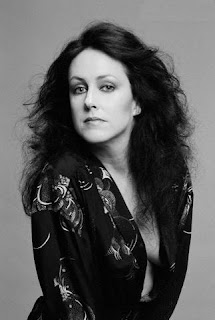 I entered adulthood free from the kinds of juvenile attachments to celebrities that are the domain of youth.

Then, I saw Cassandra Wilson perform.

The voice and the person go together to create this aura of transcendent beauty. She is one of the few people who, if I managed to actually meet, I would be at a complete loss as to what to say. She's probably smack me to get my eyes back in their sockets.
Posted by Geoffrey Kruse-Safford at 3:21 PM

Willing To Be Convinced

My knee-jerk reaction to Friday's announcement that around 100 American military personnel were being sent to several African nations - Uganda, Sudan, the Central African Republic - to aid locals in their fight against the Lord's Resistance Army and search for the leader, Joseph Kony was negative.

After some time to think, I am still wary. All the same, I am willing to be convinced. I doubt I would ever be completely happy with a project like this. We are still bogged down in Afghanistan; we have 47,000 troops in Iraq (although the Obama Administration has signaled they will meet the end-of-the-year deadline to bring the bulk of them home); our participation in the Libyan Civil War, in the midst of these other military endeavors, certainly presented strains on logistics, intelligence, supply, and other matters.

Add to that 100 troops, even if highly-trained special forces - Army Rangers, Marines, who knows what - hardly seems large enough to make a serious contribution to the struggle against what amounts to nihilistic terrorist organization. The brief, as it has been explained, is the troops are there to assist. They are to engage in defensive combat only, although the Canadian National Post is correct that any meeting would result in combat. Before American troops entered Afghanistan in the wake of the 9/11 attacks, a small spec-ops force made it as far as the building housing the ruling Taliban, and were wiped out. Too small a force, far from any conceivable supply line is not a recipe for an easy time.

On the other hand, the LRA is despicable. Seeming to enjoy violence for the sake of violence, kidnapping and inducting child-soldiers, using girls as sex slaves, whole-sale slaughter the rule rather than the exception, the LRA has no indigenous support, relying on threats of violence and terrorizing locals to keep them in line.

A larger force, with the potential for future systematic military deployment - creating a future base, in other words - would certainly be more worrying. The area of Africa in question, like much of the continent, is resource rich; the Chinese, in particular, have been investing heavily in creating sustaining extraction infrastructure in various areas of the continent. In some ways, the US sending a small force without creating the infrastructure necessary for long-term occupation does seem to contradict the usual neo-colonial criticisms of such actions. If any country would be aided by the eradication of the LRA, it would be China.

I'm still not convinced this is either wise or good policy. It has much to recommend it. It also has much going against it. Pres. Obama does seem to grasp that, rather than massed armies with tanks, artillery, and air cover, for right now the best military force is small, highly-trained, and mobile. He has used special forces against Somali pirates, Osama Bin Laden, and probably so many others of which we shall never hear. Dispatching such forces may signal a decision on how he envisions future American military force structure (along with the explosion in the use of UAVs by the Air Force). If successful, it may well succeed in multiple ways.

Call me wary, but willing to be convinced that this is good policy. On simple humanitarian grounds, it seems wise. Nation-states aren't in the humanitarian business, in particular their militaries. So, convince me, one way or another.
Posted by Geoffrey Kruse-Safford at 8:47 AM

In the fall of 1983, Roberta Flack performed at Alfred University with the Rochester Philharmonic Orchestra. Her touring band was with her, but the full orchestra was behind them. Gymnasiums aren't the best sonic environment - two years later, drummer Buddy Rich would mutter, "Fucking gyms" during a break at a gig at AU - but I had great seats in the balcony just above stage left. This was the last gasp, in some ways, of a style of performing like this. One of her collaborators, the great Donny Hathaway, had died. Later that winter, Marvin Gaye would be murdered by his senile father. Michael Jackson's Thriller was rushing out record shop doors faster than most could get it in.

But so were recordings by Sugar Hill Gang and Grand Master Flash. The next year, three guys from Hollis in Brooklyn who called themselves Run D.M.C. would release their first full length album, King of Rock. The musical landscape was about to change.

All the same, the show was phenomenal. Some performers are just must-sees.

Posted by Geoffrey Kruse-Safford at 6:48 AM