Life Is What Happens When Your Plans Go Boom

On a bit of a hiatus as life intervenes.

And thanks, as always, for reading.  Even if you don't like me, I love you.

Acceptance of another person is acceptance of the other as he is, without entailing any demands that he change in any empirical way. This boy is an addict, and while I would rejoice if he were freed from this affliction, that would not change or increase my acceptance of him as a person. And though I am not an addict, that makes me no better nor worse than he. I am not his judge. I am just his friend.

Many years ago, I was in a pastor's office.  The pastor was someone about whom I cared very much. While I was there, the pastor was distracted because a person had come to the church and asked for help to buy gas for the automobile, and to help pay a utility bill.  The pastor was griping quite loudly that the person who had done this was driving a brand new Cadillac.  I was also told that "of course" the church wouldn't help them.

I was so angry, I did something I rarely do.  I yelled and I lectured.

Who died on a cross.

After he was beaten, and spat upon, and mocked.

After he asked not to have to go through it all.

I'd guess he got played.  He didn't call out, "Thank you, Father, for this opportunity to offer myself for the world," now did he.  "Father, why have you forsaken me?" are the words recorded in one of the Gospels.  I'd call that getting played.  I'd say that's the very essence of getting rolled.  In fact, Jesus is the ultimate doormat.

And we, the churches, are called to be the Body of the doormat.

So suck it up.  Stop bitching about people who might steal from you, lie to you, use you, laugh at you behind your back.  Remove your cranium from your rectum, smile, and do the one and only thing that matters: love the world, without end, without condition, without price, without caveat.

Either we are the Body of Christ or we're a club that meets a couple times a week, has voluntary dues, feels good about doing stuff for all those poor people, and argue about what it all means.  See, if we're the Body of Christ, then we're losers and doormats.  We're suckers, naive about the way the world "really is".

Sometimes, I wonder if we even hear ourselves talk about ourselves.
Posted by Geoffrey Kruse-Safford at 7:45 AM

This Is What Incarnation Means

The blog Experimental Theology is posting selections from the short chapters of William Stringfellow's short work A Private and Public Faith.  The selection below describes far better than I ever could precisely how I understand the implications of the Incarnation.


This intimacy with the world as it is, this particular freedom, this awful innocence toward the world which a Christian is given, makes the Christian look like a sucker. The Christian looks like that to others because she is engaged in the wholesale expenditure of her life. The Christian looks like that because she is without caution or prudence in preserving her own life. She looks like that because she is not threatened by the power of death either over her own life or over the rest of the world. She looks like that because she is free to give her life--to die--imminently, today, for the sake of any one or anything at all, even for those or that which seems unworthy of her death, thereby celebrating the One who died for all though none be worthy, not even one.A Christian is not distinguished by his political views, or moral decisions, or habitual conduct, or personal piety, or, least of all, by his churchly activities. A Christian is distinguished by his radical esteem for the Incarnation--to use the traditional jargon--by his reverence for the life of God in the whole of Creation, even and, in a sense, especially, Creation in the travail of sin.The characteristic place to find the Christian is among her enemies. The first place to look for Christ is in Hell.

The Incarnation is real only when we live it out, being the Real Body of Christ in and for the world.  Anything else is just jibber-jabber.
Posted by Geoffrey Kruse-Safford at 8:47 AM

When I wrote yesterday that I would very much like to see us rid ourselves of religion, this is what I was talking about:


FOR THE CHRISTIAN FAITH, the happiest thing to happen in
America for a long time is the recession in religion. For the
churches in the United States, the healthiest fact at the
present time is the decline of religion. . . .

[T]he post-war religious revival represented an outburst of allegiance to
and acclaim for what are deeply imbedded notions about
religion in the American mentality. And more specifically,
one suspects that the religious revival was a response to and
exploitation of the self-confidence, sense of destiny, and
realization of power that marked post-war America, a re-
sponse nourished by an idea of religion which American
Protestantism, at least, had harbored for generations. It is
not so much, in other words, that Christians might be or
should be offended or disturbed by the religious views as-
serted within the context of the religious revival -- though
that is a serious consideration -- but that the religious under-
standing embodied in the revival, for all its variety -- from
Norman Peale to Billy Graham to Oral Roberts, has been
latent both in doctrine and practice in American Protestantism
all along but erupted notoriously and commercially and in

popularized fashion only during the post-war years.

These words are from William Stringfellow's A Public and Private Faith.  Stringfellow was an Episcopal layperson, an attorney, who lived a quietly out life at a time when doing so was actually illegal.  His persistent, sustained Gospel critique of American religious sensibilities so warmed Karl Barth on the Swiss theologian's one trip to America that they spent some time chatting together.  Barth insisted that we Americans "listen to this man."

Of course, we all envision ourselves as part of the faithful remnant, don't we?  Regardless of the claims and labels placed upon us by others, we all want to see ourselves as those who adhere not to some inculturated religious ideology but those who count themselves among those faithful few who continue to heed the call of Christ in their lives.  Further heightening the tension is the reality that we cannot escape the reality of religious institutions, religious ideology, and the incompleteness of our understanding and sinfulness even within our confession of faith.  Submitting to the Gospel, if it means anything at all, means recognizing how partial that submission always is.

I think if we are honest enough with ourselves and one another, we should all admit we would much rather be the hero of some new revival of the original Gospel faith than just another religious functionary existing within the all too human thing we call "Church".  Except, alas, we are.  Clergy or lay, we cannot escape the reality that we are, indeed, dependent upon and beholden to the institutional church for so much of our "religious" or "Christian" identity.  Even the kind of critique offered by Stringfellow is only possible in a context in which the tensions among the individual and society, the prevailing religious ideology and the claims of the Gospel faith, and that same Gospel faith and the larger social and ideological forces exist alongside one another.

We cannot escape these realities.  Neither can we rest easily upon one side or another without falling in to the equal yet opposite traps of fideistic sectarianism on the one hand or apologists for whatever passing religious ideology suits the moment.

The most difficult thing is to acknowledge these realities, and refuse to give in to the claims of either one.  The Gospel is, indeed, a real thing, a call from God in Christ through the Spirit to live out the love God has for all creation.  The Church, too, is a real thing that brings us together, holds us together, manages resources and creativity and holds our communal memory as well as the very real legacy of the Spiritual apostolic succession, the means of grace, and the maintenance of Holy order in our life together.  Each side holds the enthusiasms of the other in check.
Posted by Geoffrey Kruse-Safford at 9:55 AM

The Bonfire Of The Vanities

So today in church, we went on a trip to the Kidron Valley.  For those who weren't aware, it's a dry creek bed that runs between the east side of the Temple Mount and the Mount of Olives.  Here's what it looks like of late: 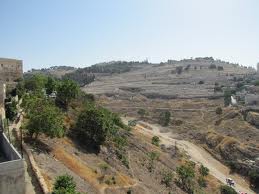 In two instances in the Hebrew Scriptures, it is written that the kings had idols burnt here.  We were invited to consider what idols we might wish to drag outside the city walls and burn, scattering the ashes on the tombs, burying the dead gods with the dead people.

I can think of so many.

How about religion, for a start?  Let's chuck it.  Get rid of the whole idea.  A source of human division and wanton cruelty for most of our history, we have created glorious structures to our own ideas, celebrated our uniqueness at having discovered the truth, and gleefully slaughtered those who had the temerity to question our arrival at the Heavenly City.  Whether Catholic or Protestant or Orthodox or LDS or Hindu or Buddhist or Jewish or Islam: drag 'em kicking and screaming if you have to, but we should rid ourselves of these idols we call religion.

I might suggest we also rid ourselves of the idol of humanity.  Not people, mind you.  Just the notion of "humanity" as something special.  The last thing we should be celebrating is some unique characteristic that separates our species from the rest of those who have arisen over the eons.  What, precisely, have we done that is to celebrate?  We build all sorts of monuments to our desire for security, whether they're commercial or financial or ideological or political, consecrate them with the aid of whatever priest flatters our sense of ourselves, and insist others stand in awe at what we have created.  Meanwhile, our oceans are deoxygenated, our forests are torn down or burn, our land and potable water - where its available as drought spreads its bony fingers across more of the planet - are poisoned, and we continue to alter the climate, which creates more and more hazards for so much of the rest of the world.

Finally, my own preference would be to torch our constant insistence that there's anything to figure out.  That life has questions that need answers, that ours is either the best or the worst of times; the best or worst of generations; the most blessed or cursed of nations or people or religious groups or however we might phrase it.  Life isn't a series of questions.  There aren't any answers, either.  Not in the Bible or the Holy Q'uran or the Baghavad Gita or the Guru Granth Sahib.  Not physics or biology or sociology or psychology.

I think there a whole lot of other idols I'd be willing to drag to that dry roadside and torch.  Getting rid of this jetsam would do us all a whole lot of good for starters.
Posted by Geoffrey Kruse-Safford at 1:51 PM